Mum was 46 when she died. Death carries so much guilt, not for the departed naturally: they don’t give a monkies! But, for all us poor bastards left behind! Life is full of so many ‘Shoulda Woulda Couldas’ no matter what the circumstances were that took them away from you. When my best friend was taken, it was instant. Boom! She was gone. I felt guilty that I was not with her as she had asked me to be (except then I would not actually be writing this) and I feel guilty for that as well. Why was I not in the car? Why was I at home in bed? Although, actually I woke up at the exact time that she left and could not get back to sleep. I have always been a bit strange like that. I get it from my Granddad don’t forget. Anyway, I digress!

Yes! Mum was 46 and I was 16. The first thing I remember feeling guilty about, apart from the whole;New Shirt, Pat Butcher incident of course was the day that I was taking the entrance exam to get into secondary school. Mum and I used to  visit a particular pet place and garden centre in these years and I would look at the guniea pigs and she would look at the Dahlias, or some such boring stuff. We would often visit ‘floral related’ places just the two of us. I expect my brother was at home counting and cleaning his Smurf collection. (If you know him, you will know this is not me attempting to be funny). Anyway, I was really nervous about the exam and Mum had promised one of these outings on the way home: with cake and a toy from the gift shop, which was usually a collectable fluffy pencil. I was so excited that I thought about it all the way in the car to my exam. We chatted about what animals we might see today and what cakes would be available. So much so that I forgot all about my Exam and just listened to my Bananarama tape on the car stereo. Mum had removed The Manhatten Transfer just this once as a treat for me! 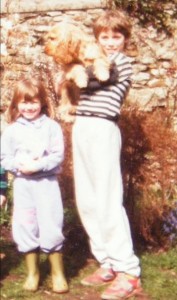 The obligatory 80’s Frog wellies there!

When we arrived at what would be my new school, I happened to see a girl that was in my current class and I was so relived to see a friendly face. My Mum and hers chatted and they offered me a lift home with them via their house for a milkshake. I felt so grown up coming home with a friend and looked to my Mum for approval. She simply looked back and rather than say, ‘Don’t forget we were going somewhere’, she just said, ‘If you are sure that’s what you want to do’. It was only in the car on the way home that I remembered our planned outing and my stomach dropped. I remember it like it was yesterday. I still can’t believe it went clean out of my mind and yet I think about it now and see it played out so vividly. That was one of those times I would go back to in my time machine (as soon as I finish those plans).

Now! I am no psychologist! Again, if you know me, you may chuckle at that but, now I am a grown Woman I think that is why I was so angry with my Mum for dying and leaving me. If I was angry with her it would be all her fault. It would only be me that people felt sorry for and there was no space for me to feel guilty. I could not possibly feel guilty then for being such an utter bitch! I am not saying this was a character trait. It was all about timing. I was a hormonal teenager and I could be such a cow bag in the last months of my Mum’s life. My parents embarrassed me and they were always unfair to me by not letting me do what I wanted and buy me fags and stuff…(sense the tone) So I would repay them by behaving like the utter toilet water secreted in Satan’s bum hole. At least, I think I was. I feel like I was. When I look back I think I was.

On car journeys I would plug myself into my cassette player and stare out the window. In actual fact I was imaging that I was actually in Bananarama and wearing black tight satin pants, leather bra and a big cross necklace. My performance was always second to none. It wasn’t actually me of course, it was the mythical me: I was 25 and I was gorgeous. Good thing about fantasy, it can take you where you want to go. The years previous had not always been that easy. My Mum didn’t just get Cancer one day and die the next. She fought for 8 years and we watched. The world I escaped to was uncomplicated and made me forget, it was fun and vivacious but, more importantly, absolutely no one was dying or losing their hair. 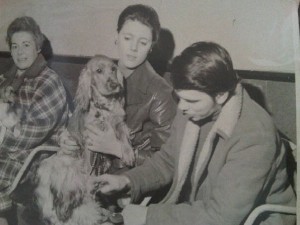 Mum and Dad (and Teddy)

When it spread to my Mum’s brain, she didn’t go ‘Doolally flip’ as you may expect. In a way, it would have been much easier if she had. She simply started losing the ability to do the most basic things: swallow, smile, talk and lastly of course, breath. She was still in there and that was the hardest part. I know she was there because she wanted an Etch a Sketch type thing to write messages on. Although, now I think to myself, how did she initially ask for the Etch a Sketch type thing because she couldn’t actually talk……Hmmm! But, I digress again!

Actually, I know that my Mum didn’t really think that I was a bitch. One of the last things she wrote was that she knew I would always be ok, that I would have a good life or do my best to make one. Maybe she knew I would always be strong and that I would have to be. I am only that way because of her. I have had and do have a good life. Life is precious and you must enjoy every last bit. I wish mine so far had been a little less painful and I wish that parts of me had not gone missing but, I will always try and show my Mum that she was right in what she said. That I will make it be alright. 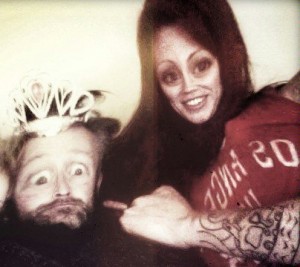 Happy and a little bit weird!