I am so slack! It has been an obscene amount of time since I actually sat my rather large bottom down and wrote a post. I have been agonising over it slightly because I keep thinking that I do not really have anything to write about. Not that anyone would be interested in anyway. Then I realised; that doesn’t matter! This blog is meant to be cathartic for me and simply sharing last years Facebook CooeyMrShifter memories rather than writing again does not really cut it for me.

As I have always said, I never plan anything that I will write. I make a conscious decision to either go back in time or write about now and that is about the limit of my planning. I find it incredibly stressful if I start to write a post and I do not get a chance to finish it in one day. I am slightly OCD about this kind of thing. I could not go to bed knowing that there was a CD in the middle of the living room floor (for example) and this is the same. As I write, it clears tension out of my brain. A little like unwinding a knot. That is why I do it. Plus, I am not particularly good at anything else. Apart from possibility having children but, I did fail at that a few times too. Not from my own choosing.

I hate not feeling just quite good enough. I always feel like I miss the mark on everything really but, when I write, even though it is about my own life, I could be anything or anyone I want. Someone far more interesting than I actually am. Unlike the people that I Love the most.

My eldest daughter has the kindest heart ever and combined with her natural aptitude to literature, I am 100% that she will go amazingly far in life. Middle child (as I have three now. Don’t know if I mentioned it!) is so completely and utterly free from any anxieties and negativity that quite frankly, I find it hard to believe that I created her. I know that she will live the fullest life imaginable because with her attitude, she will take from it exactly what she should. Something that very few of us can say we really do. The 10 month old does very little yet but, she appears to have an equal measure of eccentricity and an obvious love of music so perhaps she will be the Artistic Savant. 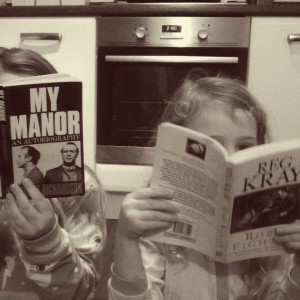 A bit of light reading for the girls.

My Fiancé is a man of much fulfilment and offering. which, considering that he would rather stay in the house all day every day is ironic. He decides to do something and then he just does it. No speculation, nothing. He just does it. An admirable and frustrating quality all in one. He thinks that he hasn’t achieved much but, he has achieved everything. Me! I write this Blog. Also, currently, I am watching aforementioned ten month old cover the floor in sweetcorn. I bet I shall still see a lot more of it later though. 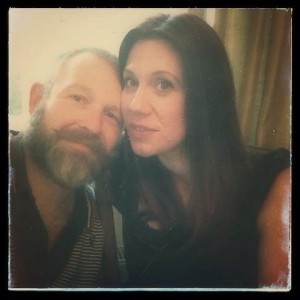 We have a great relationship. We are each as hard work as the other.

So, I digress! At lot has happened since I last forced my Life Story onto you. The very thing I was dreading since I left the Maternity Unit has happened. I had to go back to work! Yuuuuk!! I am not sure what aspect of it petrified me the most. but, I hated it all. The drive. Leaving my daughter(s). Having to get up early and be so much more organised. But, probably it was the reality that I had to return to ‘normal’ now. I had given birth months and months ago and the flowers were long dead, cards in the memory box and I had to accept that I had to be me again. I didn’t want to do that. For such a long time, you live in your own little bubble of being a new Mum, however many times you may have done it before. Plus, I got to watch as much as crap on Television that was physically possible. Good old Breast Feeding!!! 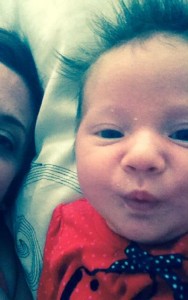 Getting in on the selfie action.

I have worked for the same company for 15 years. I am certain that my Boss (who also happens to be my future Brother In Law) has found me hard work from the start. I do like my job though. I wouldn’t have stayed there as long if I didn’t. Even if it would be a pain to find a new one. To be fair though, I have had three days off sick since I went back so I may well get fired anyway!

This is why I also felt so negative about returning to work; It was a job I enjoyed. I still had friends there. Although, as new staff were employed, I seemed to be becoming the older generation of staff. Who wants to be the elder of anything? For the first time ever, it did not bother me that I could have a hot cup of tea or that I could have ‘me’ time again. I did not want ‘me’ time. I wanted to be at home with my little girl. It was unfair that I had to miss things from her growth and two days each week is a long time when you look at how fast she will grow . I felt resentful that I had to do this. Resentful towards who, I don’t know! The Universe. Life. All those crazy invisible entities that have a lot to answer for when I am hacked off! I also felt sad because this is the last time I will do this. This is the last baby I will have and all those first moments gone are gone forever now. Which is an irrational way to think. Totally unsurprising coming from me.

But, actually, now I am back at work (when I am there!) I feel totally different. It took a little while and I will still always be just a little neurotic but, I completely become involved in it now and find that I can concentrate on what I am doing with little distraction.  I am hardly sales person extroardinare but, I think I am OK at my job and it is good to add something else into my Life which I may be OK at. Strangely, I do not really find it stressful like I used to. I enjoy that my brain still works the way it used to before I expanded my Uterus for a third time. I am hoping the stressful part of me has changed. In the same way that I won’t mind if I don’t finish this post today. But, hopefully I will.   More importantly, now that I know that I can leave my Nancy with anyone else and she has survived, I am OK with that too. Now I am a high flying executive and all!! In actual fact I really should be a little less selfish and let Daddy and The Grandparents get some of the cuddles also.

Next step, an actual date with my Other Half before he remembers that I am just a bit saggy and not nearly as attractive as over 75% of Instagram. But, I do have my own eyebrows!