The certainty of losing the one’s that we love during our time on Earth is one that we can’t deny. The roulette of how this can happen has always made my head spin (no pun intended). Watching someone die and knowing that they won’t be around for much longer makes you question everything: how you love them, how you can live without them and what they have given you: how they have shaped your life. But, when someone whom you Love desperately is in your life one day and gone the next, this is the absolute worst gut wrenching pain that you will ever ever feel! EVER! I live every single day of my life feeling this (in the background) and using it as a reminder that I have to give every single part of me and never hold anything back. Subsequently it means that I very rarely find the same in others but, I never ask for that. Sudden death will take the very thing that those left behind will spend their whole life wanting. The chance to say Goodbye.

Ruthie and I were inseparable. We spent every single day together and usually the nights too. I was 21 and she was 20. We were very much like the girls from ABBA. She was the beautiful blonde one that everyone looked at and I was the other one!

I was her squirell. Although I never quite knew why she called me that. Probably because she thought I was a bit nuts!

She had an exceptionally bad taste in men. Not just that they were arseholes that cheated on her but, they were often so far from normal, I would wonder where she ever found them. One ex removed the windscreen wipers from her car whilst she slept. But I, ever the romantic, as her constant companion was always trying to find her someone that treated her like the exceptionally beautiful human being that she was.

She believed in Love just as passionately as I did and all she wanted was to find someone who treated her beautifully that she could settle down and have babies with. But, in her last years on Earth, she had me instead. And I had her.

On the day she died, 1st October 2004, we had an argument. We never argued and we were never jealous of each other but, on this Friday, Ruth was annoyed with me over a stupid work related incident. She felt that she should have been given the same responsibility (as it was her recommendation of me that got me the job) and she was pissed off with me. As huge hearted as I am, I am also incredibly stubborn and I will wait for an apology first. Being the same, she found it hard to give that back to me also.It is a surprise to me that I took the incentive that day but, I suspect that my unconscious was whispering to me for the obvious reason. I say that I was the bigger person but, what I actually mean is that I went over to her desk, slammed down some papers and called her a ‘Silly slag’! Worked though. That one action meant that the day she left was not one full of regret and negativity.

That day there was a funeral at the Church opposite our office window and her latest boyfriend was attending so she was watching out for him. A local boy had driven his car off a cliff because he just didn’t want to be here anymore. Ironic because my Ruth was so full of life, she could have powered a generator and she never had the choice. The funeral meant that our own conversation had turned to how we thought our own would look like. Little knowing that I would actually be attending her funeral in the next two weeks. I was her only female friend and she knew full well that her church pews would be packed with young men and I’d be on my own on the end! She was actually completely accurate. It made me smile that day as I knew she was watching and chuckling. 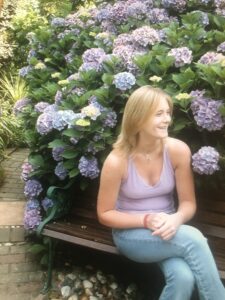 I have told the story many times but, she wanted me to come back with her after work that night so we could get ready together at her house and come back later to party. As always, I’d come with her whenever she asked. We would drive around for miles looking for pubs to eat in and boys to scope! (Not me obviously!!!) She loved driving. Once we drove a 20 mile round trip in our lunch hour to post Valentine cards so they had an alternative postmark. She sent hers to my now husband which is altogether another story 🙂

But that day, my Dad, who was already in his final months himself, had called me at work to tell me that he was having a bad day. So of course I stayed instead. This without question saved my life. I watched my girl walk up the road to her car. She was wearing a purple top and beige trousers and as I continued home to be with my Dad, we both turned to look at each other one last time as she shouted ‘I love you Squirrel’!

Did I know that she was going to leave me? Did I ever have a feeling? Absolutely not. Did I know instantly when she was gone? Categorically I did. Like someone took the moon out the sky and threw it into the sea.

I knew she never suffered because quite unbelievably I knew the person who found her after she crashed into the tree. He told me in the street one day not knowing who she was to me. His Dad was a fireman and he called him to ask what to do. But, she had already gone. So typical for her to obtain the attention of a fireman in her very last breath!

I have to end my ramblings now. I’m a wreck! Tomorrow will mark the 17th year I will have spent without her. Some days the pain is just as fresh and some days I can just think of her and smile. She taught me so very much in the four years I spent with her and even today as a much wrinklier version of myself, I am grateful for everything she gave me and that I gave her. I have no regrets. None. I told her that I Loved her every single day and for this I will be forever grateful. I have taken this lesson and apply its principal every day until it is my time to leave the Earth. I’ll never stop missing my girl. My heart will always be just a little bit broken but, I will be a little bit better because I had her.

10 thoughts on “Never can say Goodbye!”