Until I was around 12, I slept with the light on! Not just a little soothing nightlight: the actual 3000 watt (or whatever it was then) light bulb than hung from my bedroom ceiling. No one cared about energy saving in the 80’s! Quite salubriously, I had the matching brown flower pattern lamp shade and wall paper that adorned half of my bedroom wall and bed cover. I think that brown was much more fashionable then. Not a pretty brown. Dirty protest brown! Usually matched with yellow. Of course, I did have a Glow Worm but, boy those things were tough to keep going…who can squeeze for that long?!

If my Dad would come in and turn my light out, I would instantly wake up. The dark did terribly frightening things to me. If I laid in the dark for too long, my eyes would make everything bright green and swirly, like some kind of kaleidoscope and the feeling of total unreality would be too much to bear. If I got past the swirls, I would feel like I was falling. Falling into a big black abyss. In hindsight, this was probably the warning of my anxiety issues that were to follow. Nothing to do with grief at this point; both my parents slept in the room next door. When she was not working, my Mum was busy having treatment or breaking her tooth on a Kitkat (never going to forget that one), so I was just like any other pre hormonal pre teen!! 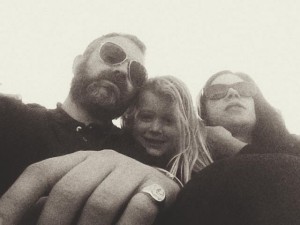 There is always light!

It was for this reason that I did not particularly like staying away. Thankfully, I very rarely stayed at either of my Nannies; one lived next door and the other lived in Wiltshire, so with the amount my Mum and Dad worked, it was unlikely they would take the time out to travel (and we only had one car). Little Nanny lived next door. I separated them both by calling one little and one big. My Mum’s Mum was not big in the slightest but, in comparison to the other, she seemed it! Little Nanny’s house was always a bit spooky . She had a ‘healing room’ next to the toilet which was always closed (not that you would want to go in there anyway). There was a spooky picture of a grey bearded man on the wall that watched you if you peeked in. Not to mention Jesus! There was a giant tapestry of The Last Supper at the top of the stars and between Jesus and Beardy weirdy, you only went to the toilet if you absolutely had to. If by chance you did make the bearded gauntlet safely, your bits nearly froze in there anyway. Plus, the huge pile of Mills and Boon books gave you a very unrealistic impression of manhood. Not to mention the idea of your Nan reading them whilst sat on the throne!!!!

Big Nanny had a carpet in her bathroom. She also had a teas made and one of those silky fluffy blankets over the bed instead of a duvet (what kind of madness is this!). She also had one of those clocks that came out of a little case and then went back in it. To travel apparently. If I ever did stay there though, my Mum stayed with me and we slept in the same bed: probably for warmth due to the lack of duvet! Funny how you associate things with people. With Big Nanny it was peas with a roast; Birds Trifle and that cream in a tin that you have to shake for 53 years until it resembled anything dollopy. Little Nanny was Mills and Boon and Jesus. 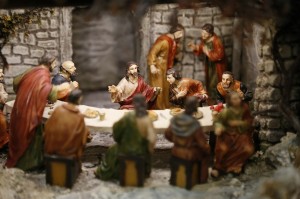 I am going to hell!

From when I was just old enough to understand; even though I am not sure I understand it now, my Mum had made me aware of her childhood and how my Nanny had lived her married life, or rather, not really lived, depending on how you look at it! When I see a patronising meme stating ‘We used to work at relationships when we were young and didn’t give up……’, this always makes me think of my Nan and I feel angry for her. Just remember,patronising meme creator: some women stayed in abysmal and aggressive relationships because they had no choice. There was no help and no refuge then. She had nowhere to go and four children to raise. But hey! , at least she did not get divorced !!!!!

I know what you are thinking. Do I still sleep with the light on? 🙂 Of course not! I have children so I sleep in whatever circumstance I can: at the bus stop..in the park! In the same way I had to rationalise with all my fears to alleviate my panic attacks, I have grown to realise that the world is still the same whether you can see it or not. Things are tough or they are not. Demons still exist but, not in the way we thought of them as children. I wish I could go back and tell my 7 year old self that these were the times I should treasure because these are the times before my life was turned upside down. I have been in the dark for quite some time recently. My other half tells me that I tend to dwell on the past when I have a hard time but, this is how your brain deals with now. I know that I will not stay in the past or in the dark in fact but, for now, I am grateful for my life. It has made me who I am. I just wish I still had my 3000 watt bulb!