Lavender candles, lovely warm bubble bath and a magical feeling of love and new life. This is not what childbirth is like in any stretch of the imagination. Even those annoying cow bags that pop out a baby in one hour and slip into their size six jeans for the post birth journey home would agree! However, if you are having your first baby, the minute you discover that the miracle of life is forming in your uterus, you cannot help but think that for you, it will probably be just like this. Let’s face it; Technically you are the first person to ever go through it and God Damn you are going to have the easiest birth since Copulation began!

Luckily, and unsurprisingly for me, the tranquillity and beautiful magnitude of my first ever pregnancy lasted for a whopping two days. Two days because no sooner had  I discovered I was pregnant than I was spending my days crawling round on all fours and sitting on the toilet for forty five minutes at a time. Just a little ‘nodule’ on the Ovary apparently. If that was a little one, I would have had to bite down on a whiskey soaked rag in the weeks that followed to cope with any bigger. Bugger, it really hurt! Any woman that has suffered with something on her Ovary or generally in her womanly bits will know that really, you just feel like you constantly want a giant poo but, it has taken the wrong turn! Still, it was better than the alternative we faced, as for a few days the doctor had told us to expect the worst and that this pregnancy may well be ectopic. Thankfully it was not but, in true spirit of Gynaecology departments all over, unless you were dead, you could wait a few days to find out for sure. (Although, my Gynaecologist rocks!! and looks like Louis Spence 🙂 ) 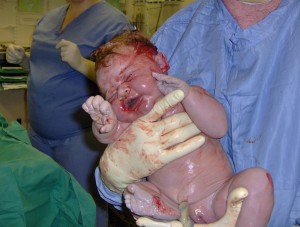 I have used this picture before, but it is disgusting and I like it!

So, apart from the constant need for a poo, the daily navigation of a spiral staircase on all fours and the hourly requirement for grated cheese in a white roll, the rest of my pregnancy seemed to pootle along quite nicely. The determination of this as an in-utero pregnancy was discovered during an internal scan but, I feel the intricacies of this particular procedure may be too much for some. Ironically, they cover it in what looks like a giant condom first but, as I said…I must stop there!

The fun really began when it was realised that all those grated cheese rolls had ensured a very yummy environment for my daughter and she clearly did not want to budge from where she stayed. Even after two weeks, she was not in the mind set to make an appearance and all the things they tell you that will encourage labour are about as useful as the birth plan they tell you to write beforehand. What you should really write in your birth plan is: give birth. In whatever way works for you. Oh, and remember the time you said that whatever happened, there was no way you were having an Epidural….Ha Ha Ha…..that was a good one Monty Python!

If when overdue, you are fortunate enough to have a ‘Sweep’, you will have had a lovely little insight into what might be waiting round the corner for you. I have had five in total and its a wonder I don’t have lady bits that could safely house the car keys. To be fair, I have never actually tried! I have friends that are nervous to have a smear test. Us Mum’s will have a little giggle at that. Blimey! When you have had a child, you are pretty much willing to save time for future gynaecological appointments by going in your pants!! 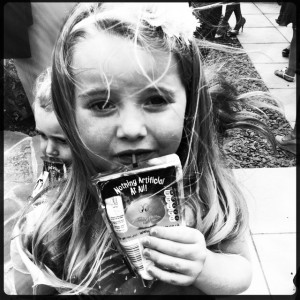 To look at her now you would think she never caused me any trouble at all.

So…What happened for me the first time round?

As I have mentioned, my daughter Lani was two weeks overdue. Technically she was two weeks and ‘God knows how long in labour’ overdue but, lets not get pedantic! I had three sweeps (which incidentally is not a type of spring clean) and was booked in for an induction on the 14th day. Almost every Mum that has been induced kindly informed me of exactly how much more painful my whole experience would be with induction, which was kind! However, if I knew then what I know now, I would have demanded that Epidural from the car on the way in…Best invention ever!!…After wine.

I honestly can’t remember where I was or what I was doing when the contractions started. I do however, remember that I was wearing an orange top! I thought, ‘Well, this isn’t bad. Give it an hour or so and I shall be pushing my lovely (and tiny of course) baby into the world’. Well, on the second night…yes night..of these pains, I was ready to reach in and pull it out myself. The pain starts off like the feel of a fart collecting in your bottom region. Except, it doesn’t escape giving you immediate relief, it goes upwards where it shouldn’t. It swirls around your back passage and creeps up towards your tummy like ‘The Scream’ and the skin on your abdomen has become so tight that it would make Joan Rivers jealous. Encompassed with all this is the feeling that you must dispose of every fluid remaining in your body and you have the urge that you never thought possible to wee, poo and vomit all at the same time. Oh, and all those baby magazines you bought which suggested you have the special raspberry flavoured lip balm for this joyous occasion can stuff that lip balm right in their print press!

It starts off as a little trickle at first. I was watching Vicar of Dibley, the Christmas episode where she has to have several Christmas lunches and stuff sprouts into her mouth. I was thinking that I had to do just the opposite of that and feeling like it too. I also remember being really grateful at this point that I had a leather sofa (and that I was wearing my ex husbands trousers) but, it is not till you stand up that you realise the full fun of the ‘Gush’ that you are about to incur and the way that it actually feels, just that little bit satisfying…..

To be continued…. (because I realise I have not even got to the hospital yet and the fun increases by ten fold then) Oh and obviously Joan Rivers was alive when I had my first baby. RIP Joan (I know she wouldn’t mind)