It was like an Aladdin’s cave! The wonders that it held were simply untold. Particularly if you were 11 years old. Naturally, I was never allowed up there but, sometimes (and only sometimes), he would go out and the minute he was out the door, I had free reign, providing Mum and Dad weren’t looking that is. My brother had his own floor of the house and being a tall 1900’s Victorian town house, it was full of lots of nooks and crannies that were so appealing if you were a child. Sometimes with curtains covering; sometimes with stairs that stopped.

Mum had loved this house for such a long time. She loved the garden and all the high ceilinged rooms and quite amazingly, we had been able to move into it and see her dream come true. Plus, it was only next door. As we lived above the café (in the scary house that I had mentioned before), we never really seemed to have a proper family space like other people had. Mum was always popping in to see the various neighbours to help out with things or just to have a chat and our immediate neighbours house had always been her dream. It was my dream too, but only because I look back on it now and remember how I loved it so. How exciting it was as a child and as a grown up, with a Dad in a wheelchair, I pretty much had the top two floors. Apart from the time that Dad crawled up the stairs like a snake so he could nose at the neighbours building project. This was the time I called him an ‘utter idiot’ and slammed every possible door; whilst he slivered back down the stairs again, giggling and then calling me to help him back in his chair….’Shuiieeeeeeeeeeeeee’….still giggling. What a sod he was!

So, when our neighbours wife sadly passed away, he told my Dad he was going into a home and my Dad was to have first refusal. Effectively, he bought it for my Mum. He never held it in the same regard because he spent all his time working. The day before he went into hospital and never walked again was the day he finished paying off the mortgage on my Mum’s dream house. She had been gone for five years by then. It wasn’t exactly an ideal house for someone that was disabled, especially when your ramp(s) are delivered from the NHS and they only have one available! Rather annoyingly, Dad still had the very old fashioned four wheeled wheelchair! But, we made it work. Whilst Dad was in hospital, I made it as suitable for him as I could. I decorated the bathroom downstairs and with the help of some friends, cleared out the downstairs ‘room of crap’ to be his bedroom. We added tiny ramps to each room so he could get around and were massively grateful for the Victorian town house which used to be self contained flats as he had every room he needed downstairs. 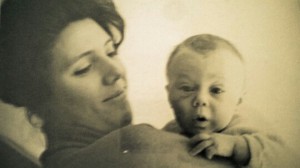 Mum and a monkey….sorry, I mean my brother.

I worked hard on that house. I worked hard getting it ready for Dad and I worked hard clearing it out when I had to leave. Thankfully I had my previous in laws, who, now treat me like the anti-Christ but, actually, without them, I probably would never have managed. Or at least I would have completely lost my marbles. Sadly, it was the case that nearly everything got chucked. A five bedroom family home to clear is not the easiest task and although, I regret it so much, I had little choice but, to simply skip the majority of my memories. I can never get those things back but, I always have them where it counts. For as long as I keep those marbles anyway.

After I had finally moved and negotiated the sale of the house to the same person that had bought our café next door, I came to the house again. The new owner had some post for me and asked that I would come and collect it. I was hesitant because I really didn’t want to go back in. It was no longer my house and I wanted to only remember my house as it used to be. I wanted to think of my Mum catching me smoking in the upstairs loo (God knows how because I left the window open!), finding my brothers giant porn stash behind the curtain in his bedroom and, most importantly, those last months with my Dad. Buying him treats from Waitrose. Going to the dairy to buy chocolates, and then dropping them and running over them. Shouting at him for slithering up the stairs and trying to get him back into bed when the dog had pushed him off. Against my better judgement, I knocked on the door and was faced with a sea of builders inside, whacking the crap out of the banisters with a massively huge sledge hammer. I cried all the way up the road until I got home. It was only junk mail!

Due to our house previously being flats, we had our own fire escape into the garden from the second level. Under the stairs outside was an old dresser that used to temporarily house my guinea pig(s). My Mum bought me one from Devon County Show when I was 11. It was a boy. Magically, the little boy guinea pig grew a vagina over night and gave birth to eight babies. My Dad was thrilled. Anyway; the dresser now held my special offerings to Fairy Folk. General crap that no fairy would actually want. You know? Butchered ‘4’ Leaf clovers and a saucer of stagnant water. The Fairies left me notes all the time. They would apologise for their shaky writing but, it was tricky to hold a pen. I knew it was Grampy writing them actually and the writing was a combination of age and difficulty in holding a fag whilst corresponding. 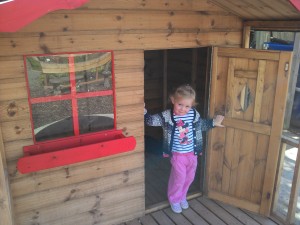 I wish my kids had the garden I did to play in.

He had the whole top of the house. My brother did. One room housed the ginormous video collection. One, the general living area with games console but, the room I loved the most was the one with the entire wall of CD’s. There was everything you could ever imagine, from Hole to Barbra Striesand to Gorky’s Zygotic Monkey and I couldn’t wait to get in there. After I had selected the video of my choosing, pilfered a book (usually Fantastic Mr F0x), I would peruse the collection of music available to me. This ensured that I could sing and watch myself in the mirror pretending that actually, I was most talented and attractive. After I had watched my video that is; usually skipping bits in case he came home and caught me. He always knew I had had one though because I never rewound them. Mr Anal 1992 would never have let that happen! It was only when I was older and he would let me play Trivial Pursuit with him (whilst wearing gloves), that I thought to peek behind the curtain in his room. That was when I discovered the giant stash of porn magazines. I will leave that there. 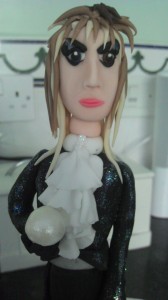 My Love of music extended to my girls. This was my 3 year olds birthday cake.

I miss my home town a lot lately. I want to go and visit, walk around with my girls and visit the dairy. I would like to walk to the fields where my brother and I would take our dogs; Candy and Floss. Where we would spend all day. Have a Chinese curry that my Dad and I would enjoy every Thursday, after I had been to the pub. My Mum and Dad are still there and I am all the way over here; in a town that never really felt like my home. I am very happy and have a lovely life but, I miss it. I miss them. They will always be there but, it feels completely alien to be somewhere where they are not, even though they are in the ground. It may as well be a million miles away, particularly when you reach the part of the month when it is bread and water all round.

Whatever happens, I will always remember that I was lucky. So very very lucky and I am grateful every day. I have so many stories that I can tell my children to take me right back there whenever I want. Perhaps I will refrain from mentioning the special stash behind the curtain though. Perhaps!